There’s the old saying which says, ‘Don’t judge a book by its cover.’ Now, we all like to think we don’t, but to be honest, most of us do. A beautiful cover is the first thing you notice about a book. It’s the thing which draws you in, entices you to maybe read the book’s description, possibly crack it open and take a peek inside. Many would argue that it’s the content which sells the book, and there’s a lot to that theory, but it’s the cover’s job to draw you in from the start.
A wonderful friend of mine, Ms. Heather Slaughter of Bookpressed, once referred to the right book cover as wrapping for your present, and honestly, I can think of no better description.
When I first decided to publish, I didn’t want to sink a small fortune into my little project. You know, just in case my book bombed. Indie authors come and go, but if a book isn’t going to sell, there’s no point in sinking your life’s savings into a cover. So I went the cheap, er, frugal route and did it myself to start with.
I knew a few things about cover design, but precious little. One of which was, I needed a royalty free image for the cover. So I found a beautiful picture of a creepy, gothic doorway. It cost me a whopping $15 to make the original cover. 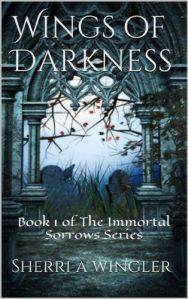 For those of you who have read “Wings of Darkness,” I think you’ll agree it was a nice nod to the graveyard scene in chapter 6. For those of you who haven’t read it yet, it’s just a pretty picture which makes absolutely no sense if you’re cruising through Amazon’s 3 million books. It’s pretty, but it’s vague.
Then, wonder of wonders, I started getting some pretty outstanding reviews (if I may say so myself.) My book wasn’t flopping at all. It was floating along, holding its own. Book 2 was about to come out when I decided to bite the bullet and have a professional redo the first cover, and I’m so glad I did.
Finding the right person to do your cover takes some work, but that’s for another blog post. I lucked out pretty quickly. A friend of mine introduced me to a very nice lady, Danella Miller of Danella’s Designs. She actually does a bit of everything. A photographer originally, she also designs websites, graphic design, and now book covers.
http://danellasdesigns.com/main/product-category/bookcovers/
I highly suggest, if you’re in the market for new covers, that you go pay her a visit. Her pre-made covers are just gorgeous and start at less than $100. Custom jobs are a bit higher, of course, but well worth the results.
This is the new cover.

It captures my main character perfectly. The colors stand out and it does exactly what it’s supposed to do, which is draw the reader in.
Book 2, “Wings of Shadow,” needed a cover, too. This is what she came up with. (Special thanks goes to our model for Izzy, Miss Katie Durant.) 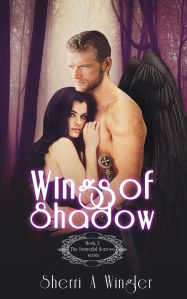 The cover changed in February, and I really should have gotten this post up earlier, but I wanted to see how the cover change would effect sales. A few other authors I know were wondering about how it would change my bottom line, too. Happily, I can report that the new covers have just about quadrupled sales! Yes, I sank some money into professional covers, but they’ve paid for themselves in no time. I was so happy with Danella’s work, in fact, I commissioned her to do the rest of the covers for “The Immortal Sorrows” series. Each cover has come out more beautiful than the last. She not only wrapped the present, she put a giant bow in top!

3 thoughts on “Judging a book by its cover”